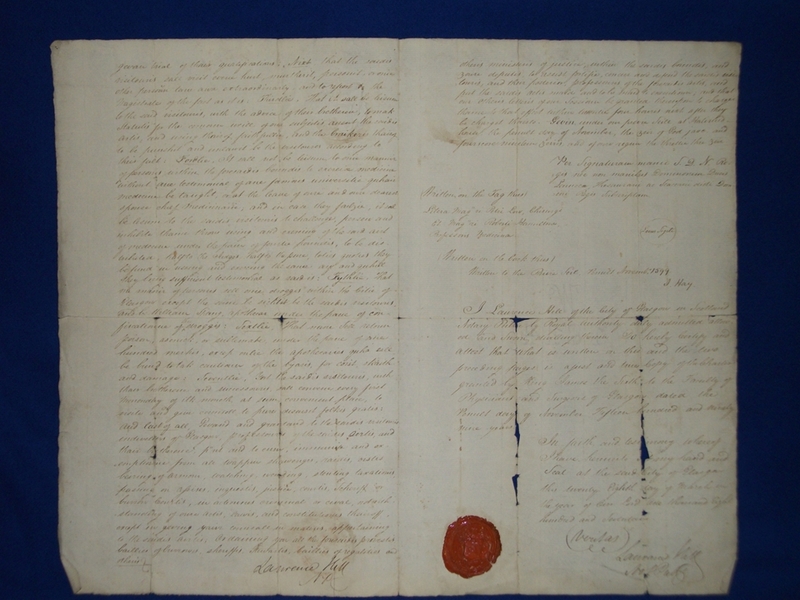 The Charter of 1599 sets out the College's founding principles and responsibilities, which continue to inspire the College's purpose today. It was granted on the 29th November 1599 by King James VI of Scotland.

The poor standard of healthcare in Glasgow compared to Paris must have concerned Peter Lowe from the outset, but he was not alone in a desire for improvement. A Kirk Session minute of 14th September 1598 reads “The University, Ministers and Presbytery take cognition who are within the towne that pretend to have skill in medicine and hath not the same, that those who have skill be retained and others rejected.”

A deputation went to the Town Council who met on 14th April 1599, and resolved that the Principal of the University, one of its Regents, the Master of the Grammar School, along with three Bailies and three Ministers, should examine the town’s practitioners regarding their skills. However, there is no record of them acting or even convening.

Lowe may have forestalled them by having already petitioned the King. In the second edition of his Whole Course of Chirurgerie he states “It pleased the king to hear my complaints about certain abuses of our art.” He then recounts how this resulted in the Charter on which the College is founded.

After declaring its area of jurisdiction, which included most of the west of Scotland, the Charter details the powers granted, and the privileges bestowed, upon the new institution. It sets out the requirement for standards, licensing and regulation in the practice of medicine, surgery and pharmacy. It established the College as a unique medical and surgical body, the first multi-disciplinary institution set up to improve standards of healthcare.

The original Charter was lost in the midst of legal proceedings involving the University in the 19th Century, however a notarised copy exists in the College's archives. The College's first minute book, dated 1602 - 1698, contains a written transcript of the Charter.

The Charter was submitted to Glasgow's Magistrates on 9th February 1600, and endorsed by them. However, there was a hiatus in the establishment of the College because Peter Lowe was required to accompany the Earl of Lennox to the French Court on ambassadorial business. However, Lowe was still the town's surgeon. At a meeting of the Bailies and Council on 18th June 1601, at the request of Lennox, they agreed to let Lowe accompany him “without loss of pay or prejudice to his contract until the next 11th November or whenever his lordship might return.”