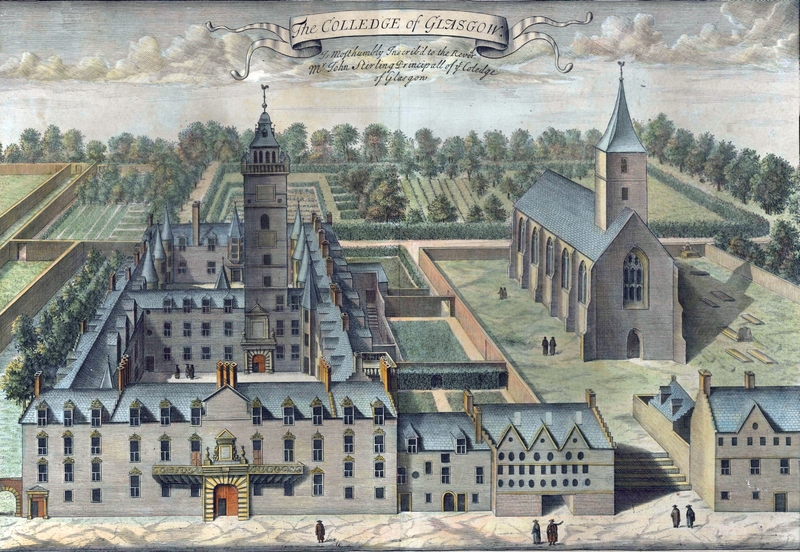 Hand-coloured print of 'The Colledge of Glasgow', with the Blackfriars Church visible on the right.

Peter Lowe returned to a post-reformation Glasgow in the spring of 1598. The Cathedral had been protected from damage by the craftsmen, masons and carpenters who were proud of its architecture. The University of Glasgow was well established in Lord Hamilton’s premises on the east side of the High Street when Queen Mary granted it 13 acres of land behind that, which had belonged to the Dominican Friars, and included their chapel which became Blackfriars Kirk. This is where the University's substantial premises were built, with their impressive frontage onto the High Street, and where the University remained until moving to Gilmorehill in 1870.

Peter Lowe soon became an active citizen of his native town whose population had increased to 7000. He became the town’s paid surgeon. A Council Minute of 17th March 1598 records “It is aggreit of new and contractit betwixt the town and Dr Low for 80 merkis money be year.”

On 29th January 1599 he was admitted a Burgess and Freeman of the town ‘without payment of a fee.’

On 26th May 1599 he and his wife Grisill bought a house. “James Lyonne, merchant, citizen, sold to Mr Peter Lowe, surgeon, and Grisill Pollart, spouses, a fore-tenement, heigh and laigh……on the west side of the street leading from the Metropolitan Church to the Mercat Cross.” It was a large property and is described in detail in the missive. He and Grisill had a son, John.

Lowe appears to have become a member of the Trades House because his name is recorded as a representative witness in several transactions in the town’s minutes. He had become a well integrated and respected citizen of Glasgow.