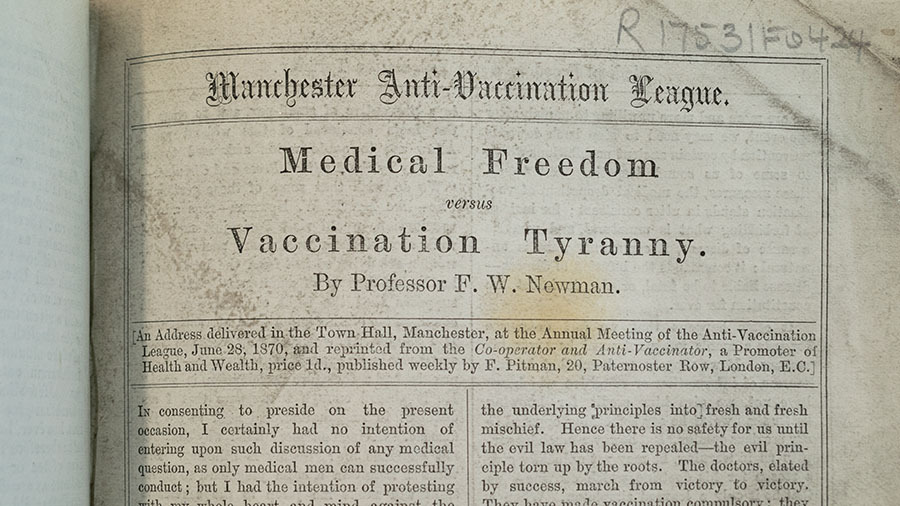 The controversy around vaccination is not only a contemporary issue, but has been debated since the early days of inoculation. Although people were vividly aware of the severity of smallpox, many held suspicions about the efficacy and potential side-effects of the smallpox vaccine.

Similar to today, much of the distrust came from misinformation around vaccinations and their side-effects. Jenner's mode of immunisation against smallpox involved the use of matter derived from cowpox pustules, a disease caused by close contact with cows. This caused members of the public and doctors to be sceptical towards the vaccine. With the scepticism came conspiracies, rumours of patients sprouting horns and beginning to resemble cows after receiving the smallpox vaccine. Thousands were refusing to vaccinate their families. The government had to step in.

In the middle of the 19th century the UK government began to introduce legislations to require people to be vaccinated, challenging traditional civil freedoms in order to improve the health of the public. The 1853 Compulsory Vaccination Act of England and Wales called for compulsory vaccinations for young infants, with the risk of fines if parents refused. The first Compulsory Vaccination Act in Scotland was introduced in 1863, setting up a system whereby parents were held accountable for ensuring their children were vaccinated by birth registrars. The main difference, however, with the vaccination system in Scotland was that it wasn't based around the Poor Law, as it was in England and Wales. Instead, a system was conceived by the Royal Colleges and Faculties in Scotland to ensure that vaccination practice was spread equally across the body of practitioners, who would receive reasonable pay for their services.

Due to the apparent challenges on civil liberties, anti-vaccination societies and leagues established themselves throughout the 1800s. Their main concern was not with vaccination itself, but with the compulsory nature of the vaccination acts. Many parents did not believe that vaccination was the only effective way to control smallpox and campaigned for the right to decide whether their children would be vaccinated or not.

← Vaccination Equipment
Tuberculosis →
Back to this Exhibition
Back to all Exhibitions