Portrait of Robert Hamilton, standing half-length in a black lace-trimmed cloak.
The physician Robert Hamilton was one of the co-founders of the College, and is named in the Royal Charter of 1599 alongside Peter Lowe and William Spang.

The early years of Hamilton's life are not well recorded, however there is record of him as a doctor arriving in Aberdeen in 1594. Although Hamilton is referred to as a "professoure of medicine", there is no record of him obtaining an MD. He was the senior office bearer of the College in its first 20 years.

According to College minutes the early portraits of Hamilton, Lowe and Spang had deteriorated to such an extent by 1822 that copies were made. The original was the work of an artist from the 17th Century Scottish School. 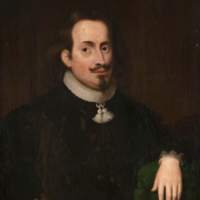